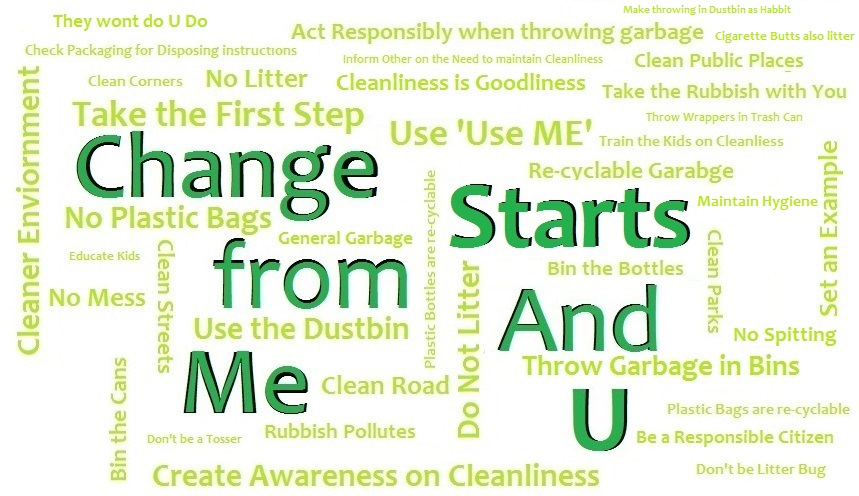 While we were taking a stroll engrossed in our discussion, we wondered why was it that the developed countries are so neat and clean?

The answer is simple – it is about the society and the attitude of its people. Probably, there would be very few countries where the chief driver is enforcement, but in the majority, it is the self-discipline of its people. It is ingrained in the psyche of the people to not indulge in any act which causes folly. There are just a few scattered incidents from time to time, mostly committed by tourists.

After venting out our frustration on the state of affairs, our focus meandered on finding solutions to these problems. We discussed the possibilities which can be exercised at an individual’s capacity – some thoughts which might help bring a change in our habits. In a nutshell, how can ‘Me’ and ‘U’ contribute.

As the first step of this journey, we created a Facebook page and after some deliberation, we named it – ‘Change Starts from Me and U’. Though a mouthful, at its heart, it calls for involvement through self-discipline (and preaching later).

This happened few months before the then Prime Minister of India called it out as a national movement. India should be thankful that a national leader started the Swachh Bharath (Clean India) movement. A mission that is now driven by the Government of India and has a popular Prime Minister taking personal interest giving an amazing boost to the initiative. The movement has gained speed with more and more participation from individuals, society, and corporates.

Over time, we have expanded our initiative to include more areas and pressing issues related to the environment and sustainability, and “Change Starts from Me and U” became ‘Change Started’.

Change Started is our small contribution towards making a world a better, cleaner, and greener place.

Hopefully, we will stop complaining and rather start participating in this journey.