Middle of November 2020, the spotlight was on the US president-elect Joe Biden’s announcement to re-join the Paris Climate agreement barely days after Donald Trump formally pulled out. On 17 November, an emerging Southeast Asian country caught the attention.

About Paris Climate agreement: It is a global pact forged in 2015 among countries of the world to avoid the worst impacts of climate change. The pact is a nonbinding agreement among 190+ nations to reduce emissions and keep the increase in global temperatures well below 2 degrees Celsius compared with preindustrial levels.

Carbon pricing is a widely used method of the Paris Climate agreement signatories to reduce greenhouse gases (GHG) and check the emissions.

Businesses especially the manufacturing units emit large amounts of GHG, carbon price is the cost applied to this pollution. Thus it provides financial incentives to the companies to lower their carbon emissions.

In the post-COVID period when countries are pushing for economic recovery, Vietnam’s carbon pricing law encourages them to follow suit.

As a result of the Paris climate agreement, there is a general consensus to bring structural changes in policymaking and the desire to shift towards a low-carbon economy. This revised law in Vietnam will usher reforms in renewable energy and a gradual transition to a green economy.

With a massive coastline of more than 3,400 km, Vietnam is highly vulnerable to climate-related natural disasters. Every year it is affected by many typhoons, floods, landslides.

In 2020, the country was hit by 14 storms that triggered heavy flooding and landslides leaving more than 350 people dead or missing compared to 133 last year. As per reports, these natural disasters caused economic losses of approx. $1.6 billion, five times compared to 2019.

Vietnam, though on the high growth of economic development, is still largely an agrarian economy, with a large number of people still dependent on agriculture. Floods and rains leave them extremely exposed to the vagaries of nature.

China is no longer the low-cost manufacturing hub it once was, a combination of many factors has led to many companies shifting their base to its neighbors, Vietnam. With close to 100 million population, lower wages, a high number of free trade partnerships, U.S.- China trade war, and an improving human capital index – the country has emerged as a major manufacturing destination.

Samsung, Nike, Apple, Addidas, LG, and many other global manufacturing powerhouses have established in Vietnam. Such is the Vietnam manufacturing prowess that even the Chinese suppliers are also migrating to the country.

Adopting the carbon pricing law, Vietnam will be in a better position to balance the industrial growth while also protecting the environment. The law will also improve country’s standing as an international manufacturing hub. Companies setting up their manufacturing facilities will be able to take advantage of this law and improve their environmental scores.

On the other hand, the country will be able to keep its air clean.

The booming economy and industrial growth have made Vietnam one of the highly polluted countries in South East Asia. Nation’s capital Hanoi and Ho Chi Minh City, are among the top 15 polluted cities in Southeast Asia. As per reports, nearly 100,000 people have died due to air pollution in the last couple of years.

All these factors would have played a part in the country’s decision to go for the carbon pricing law. Though the modalities of the law are still in progress, it will enable greenhouse gas emission inventories, monitoring, reporting, and verification of emissions.

Many economists and environmentalists opine that putting a price on greenhouse gases is the most effective economic tool to meet the goals of the Paris Agreement. More than 40 countries have so far implemented carbon pricing, some of them were successful, while some countries have faced a lot of internal resistance.

In the post-Covid economic recovery, the countries across the world would need to ensure that in the name of recovery, humanity doesn’t have to pay environmental costs.

Given the context, Vietnam’s carbon pricing law is possibly not the only solution but it is a step in the right direction.

Golden Bridge, which is one of the popular tourist attaction in the country, is held by 2 gigantic hands. Not sure what is the real symbolism, but Vietnam need to steer its growing economy from one hand and control on climate vagaries from the other. 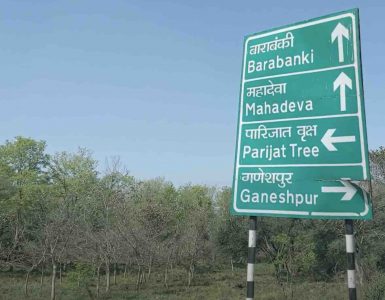 India’s northern state of Uttar Pradesh has claimed that between 2017 to 2021, the government along with citizens has planted 100 crores (1 billion) trees in the state. The current state government which was...