Paying reverence to plants and trees in India is common, but the Tulsi plant is the most regarded plant. Tulsi (Tulasi) or Holy basil is regarded as an extremely sacred plant in Hindu customs and holds a huge significance in Indian homes for thousands of years.

Hindus regard it as an earthly manifestation of the goddess Tulsi; she is regarded as the avatar of goddess Lakshmi

Tulsi Vivah – The legend behind Marriage of the Tulsi Plant

Tulsi Vivah is a Hindu festival where a ceremonial marriage of the plant is performed with lord Vishnu or to his avatar, Lord Krishna.

The Tulsi wedding signifies the end of the monsoon and the beginning of the wedding season as per Hindu customs.

Though there are many legends and stories behind the tradition, one of the widely accepted ones is mentioned in the Hindu scripture Padma Purana.

Brinda was married to King Jalandhar.  Brinda due to her devotion to Lord Vishnu and piousness provided King Jalandhar with incredible powers. Due to Jalandhar’s invincibility, he started attacking other Gods, and none of them were able to defeat him. They requested Lord Vishnu – the preserver in the Trinity – to find a solution as a last resort.

When leaving for war with Lord Shiva, King Jalandhar’s wife Brinda went for meditation and prayed for his victory till he returns. Lord Vishnu disguised himself as Jalandhar and went to see Brinda. Seeing her husband return, Brinda left her meditation.

With her meditation interrupted, Jalandhar lost his power and was killed by Shiva and his head fell in Brinda’s palace.

Seeing this she realized it was not her husband but Lord Vishnu. Out of anger, Brinda cursed Lord Vishnu to transform into a black Shaligram stone and to be separated from his wife. Following this, Brinda herself committed self-immolation, and the gods (or Vishnu himself) transferred her soul to a plant, which was henceforth called Tulsi.

Lord Vishnu also blessed Brinda that in her next birth she will marry him. Hence, to commemorate this event, the ceremony of the Tulsi marriage (Vivah) is performed. 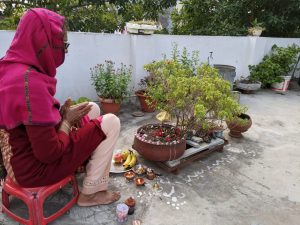 The Tulsi marriage is celebrated with great fanfare and it resembles the traditional Hindu wedding. The marriage ceremony is conducted at homes and at temples, by marrying Shaligram stone to the plant.

Lamps, fruits, sugarcane are kept around the plant to celebrate the occasion. The plant is decked up as a bride with bright-colored clothes, jewelry, and flowers.

During the ceremony, Vishnu and Tulsi, are tied together with a cotton thread to signify the marriage.

Many people observe fast on this special day, sing songs, and take her blessings so that our lives are filled with purity calmness, and happiness forever.

In many northern Indian cities located on the banks of the river Ganga like Varanasi, Allahabad, Patna, and Haridwar, the devotees as part of the ritual offer prayers and take a holy dip in the river.

On the occasion of #Ekadashi, devotees took a holy dip in the #Ganga this morning pic.twitter.com/YoKdkU82dO

Tulsi is more precious than all the material possessions

According to folklore, there is another story of Lord Krishna Tulabharam and Tulsi.

Satyabhama, another queen of Lord Krishna, prides herself about the love Krishna has for her and her grasp over his heart. On the other hand, Rukmini, Lord Krishan’s first wife is devoted and humble in her service of her Lord.

On one occasion, the sage Narada Muni arrived in Dwaraka, the place of residence of Lord Krishna. In the course of the conversation, Narada hints to Satyabhama that Krishna loves Rukmini more than her. The angry, Satyabhama challenges Narada to prove it. Narada tricks Satyabhama into accepting a Tulabharam challenge, a practice of weighing a person against precious jewelry and ornaments.

Satyabhama had to perform this ritual, where she has to give Krishna away in charity to Narada if she is unable to get enough jewelry that will outweigh Krishna. He further persuades her by saying that if Satyamaba is successful, Krishna’s love for her will increase many folds. Proud Satyabhama tells Narada that she can easily mobilize enough wealth that it is a child’s play for her to outweigh Krishna.

The stage is set for the ceremony, Krishna, always the mischievous one readily submits to this drama in spite of his other queen’s pleading. Satyabhama arranges for a big scale and places all her gold ornaments on one side and Krishna on the other side, but the scale did not budge.

Narada warns her that if she can’t put enough gold or diamonds, Krishna will become his slave to be done with as he pleases. Meanwhile, Krishna remained a mute witness to all this drama and rubs salt into the open wounds of Satyabhama’s ego that he has now to become a slave to some cowherd and will have to suffer the separation from his dear wife.

Satyabhama swallows her pride and begs all the other queens to give their jewels. They agree out of love for Krishna but their wealth also did not help in tilting the scale.

Narada then suggests to Satyabhama that Rukmini may be able to get her out of the predicament. She swallows her pride and appeals to the devoted wife of Krishna. Rukmini comes and with a prayer to her husband puts a single leaf of the sacred Tulasi on the scale (Tula). The scales suddenly become so heavy that even after removing all the other jewels, the scales are weighed down on the side of the Tulasi leaf.

While there are different versions in different texts as to why the weighing was arranged, the story of the Tulsi leaf placed by Rukmini being worth more in weight than that of Satyabhama’s wealth is a common ending.

The Tulabharam incident is often repeated to articulate the significance of Tulsi and how a humble offering to God is greater than any material wealth. Even then the weight of these ornaments could not outweigh Krishna! However, a single tulsi plant placed on the other side by Rukmini tilted the balance. The anecdote goes to show that even Lord Krishna regarded Tulsi as superior to himself.

Tulasi/Tulsi (Ocimum sanctum), commonly known as holy basil, is an aromatic perennial plant in the family Lamiaceae. It is predominantly cultivated in Southeast Asia and the Indian subcontinent. 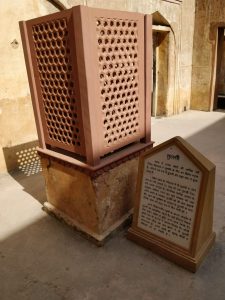 Generally, the plant is kept at the entrance of the house or the central courtyard in most Indian households. As a practice, every day, people pay respect to the plant and put water and light a lamp.

In many religious ceremonies, leaves of Tulsi leaves are used particularly in Charanamrit or the holy water and given as an offering to devotees. It is known to be the only holy object which, once used in worship can be cleaned and reused in another ceremony, because it purifies itself.

The sacred basil is not only known for its spiritual value but also for its medicinal value and is considered the queen of all Indian herbs. Taking the plant in small doses helps in increasing immunity.

In conclusion, let Tulsi marriage be an occasion to seek blessings and a day to remind that we should always respect each and every living being on this planet. 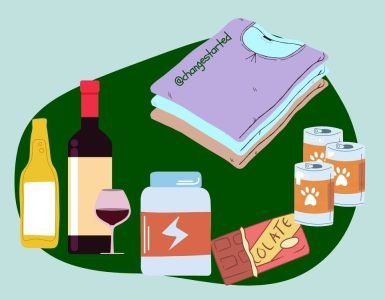 Whether it is for health reasons, love for animals, or the environment, the number of people adopting a vegan lifestyle is increasing every day. A vegan diet is no longer just under the realm of some religious... 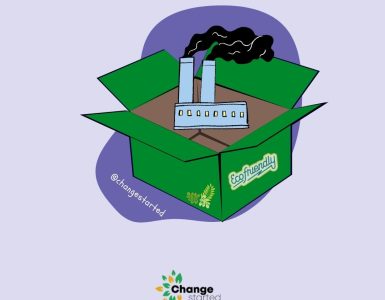 Do you remember the incident when Christiano Ronaldo removed the Coco-Cola bottles during a press conference? While that was done to demonstrate the ill effects of carbonated drinks, there is another aspect of the cola... 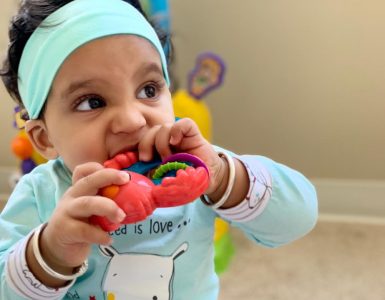 The Indian Toys market is worth more than US$ 1.5 billion, in which the majority of companies make toys that are made with plastic and artificial chemicals. Considering the harmful impact of plastic toys on children’s...