Once upon a time in a beautiful forest, there lived two trees, Ra and Sha. Both trees were tall, stout, and dense green and provided habitat to many birds, monkeys, and a fox. One day, Ra spotted a woodcutter coming toward them with an ax in his hand. With disappointment, Ra and Sha asked all its inhabitants to immediately go and find another tree. All the animals simply refused and made a plan.

As soon as the woodcutter came near the tree, all birds and monkeys suddenly started making noise, vigorously galloping around the woodcutter and making sure he doesn’t pick up his ax. In the meantime, the clever fox brought the king of the Jungle, the Lion.

Seeing all these animals and lions in the area, the woodcutter ran away without even picking up his instruments.

Thus, Ra and Sha were saved from being chopped.

This is a story that you would have heard in your childhood and you would have felt delighted that trees and animals were not harmed in the end. However, not every tree is as lucky as Ra and Sha and unlike in the story, the animals can’t really fight against the modern-day woodcutters. What it results in – Deforestation.

Deforestation refers to the forceful removal/cutting of trees and the conversion of forest land for other uses. When trees are cut and forests are cleared, it not only drives away the animals and biodiversity, it has several consequences. 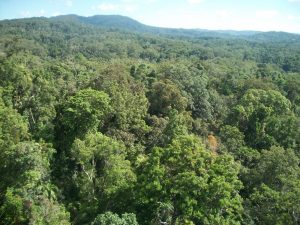 Trees, as we know, provide many benefits, from giving oxygen to cleaning the air, from preventing soil erosion to giving food and medicines, Trees are eternal to our survival.

Deforestation does everything opposite – it drives climate change, damages food production, and makes the land unusable.

When early civilization started evolving, trees were being cut for fuel and for building homes. The scope has broadened extensively in the last 200 years, especially post-industrialization.

According to the World Bank, since 1990, the world has lost more than 5 million hectares of forest cover, an area larger than Costa Rica.

Every country has its own reasons for deforestation, Brazil, which is home to the Amazon rainforest, is cutting trees to clear pastureland for cattle. In Indonesia, which is home to the world’s third-largest tropical rainforest, after Brazil and the Democratic Republic of Congo, the trees are being cut down to make way for palm trees. In Nigeria, the trees are cut to make charcoal, which it exports all over the world.

So essentially, there is no one explanation for cutting trees, countries and regions either do it for their domestic purposes or for economic benefits from global consumption. Let us look at the reasons for deforestation.

Food Agriculture: Growing food crops remains one of the biggest reasons for deforestation. As per a remote sensing survey conducted by the Food and Agricultural Organization (FAO) of the United Nation in 2020, agriculture accounts for 88 percent of global deforestation.

Animal Agriculture: The food that is grown as part of agriculture, the majority of that goes to feed animals that are part of the meat and dairy industries. In addition, huge portions of land are required for animal grazing and providing them a habitat, which further leads to deforestation.

Palm Oil Industry: Palm oil is a widely used vegetable oil in many of our consumer products, and is extracted from Palm Trees. The major cultivators of this crop are Indonesia and Malaysia, where large swathes of rainforest are cut to make way for Palm Trees.

Urbanization: With the rising population and increasing trend of people moving from villages to cities, there is an increasing need for housing and other infrastructure activities, which leads to deforestation. As per UN, approximately 70 percent of the world’s population is expected to live in cities by 2050, posing a huge risk to our forest land.

Mining Industry: Mining is the process to extract precious metals and gemstones such as diamonds which are found underneath the Earth’s surface. When humans are able to estimate these precious reserves lying under woodland, these forests are cleared to establish the mines and construct infrastructure for transportation and logistics.

Forest Fires: While most forest fires are natural, the frequency of fires has considerably increased due to global warming and rising temperatures. Forest fires not only cause deforestation, but the burning of trees releases the stored carbon dioxide back into the atmosphere, which further aggravates the environment.

Paper Industry: Paper and pulp industry is one of the largest sectors which uses trees as raw materials and therefore one of the biggest reasons for deforestation. Millions of coniferous and deciduous trees are cut daily to make paper for our daily use. As per estimatesan equivalent of 27,000 trees is used every day just for the supply of toilet paper around the world.

Why do we need to get worried about tree cutting? Let us look at the impact of deforestation.

Loss of Biodiversity: Forests are home to millions of terrestrial species – from small insects to big mammals – deforestation poses an existential crisis to each one of them. Given the interconnections of our biodiversity, losing any part can be dangerous.

Soil Erosion: Trees have long and complex root system which binds the soil. In addition, the tree canopy protects the soil from damage by Sun’s UV rays. Deforestation results in the soil becoming increasingly dry, devoid of microbes, and leaving the area more vulnerable to natural disasters such as landslides and floods.

Global Warming: Trees absorb carbon dioxide and release oxygen, which is essential for the survival of all species. Deforestation not only reduces Earth’s ability to capture carbon but also releases the carbon that is stored by the trees back into the atmosphere, thereby increasing the temperatures.

When the trees are uprooted off the ground, it disturbs the soil, and a large amount of carbon that is stored in the soil is released into the atmosphere as carbon dioxide. As per estimates, there’s more carbon in the soil than in the atmosphere and all plant life combined.

Loss of food and jobs: Trees are a source of many foods and medicine, which not only provide a source of nutrition but also livelihood to millions of people. As a consequence of deforestation, people will lose their means to earn and sustain themselves.

Learn about the importance of Rainforests.

What is the Importance of Rainforests

Learn about the Miyawaki method of afforestation.